Somalilandsun : On May 18, it will be thirty years since Somaliland seceded from Somalia. This small territory of about 5 million inhabitants is today one of the safest and most peaceful on the continent. Even if it is still not recognized by the international community, and it receives almost no development aid. Which is sobering.

One fine day, Edna Adan had had enough. She didn’t want to have to keep telling people where she came from. So she had a map printed on the back of her business cards with the following inscription: “Where is Somaliland in the world?” We see the whole of Africa and, next to it, a zoom on a small piece of the North-East, which shows the border of Somaliland, the more than 800 kilometers of coast on the Gulf of Aden, the green plains of the port of Berbera, as well as the arid countryside that borders neighboring Somalia.

The country of Edna Adan is invariably confused with Somalia. While it is quite the opposite in many ways. “The mere fact that you are sitting there shows how far we have come,” Edna slips into her small university office. Opposite, in Somalia, no European visitor can move without an escort. The terrorists of Al-Chabab are reigning terror there. Rarely a day goes by without a terrorist attack or kidnapping.

Edna is 83 years old and holds an amazing shape. She not only oversees Edna Adan University, but also a clinic in the capital, Hargeisa. Here, no slums, no beggars, but pretty houses with white walls, red bougainvillea in bloom, and, in the city center, modern office buildings, and an ice cream parlor on every corner. Young women go to fitness clubs reserved for them, play basketball or go jogging. There is a cultural center which organizes a literature festival which has become one of the most important in Africa, which attracts tens of thousands of visitors. 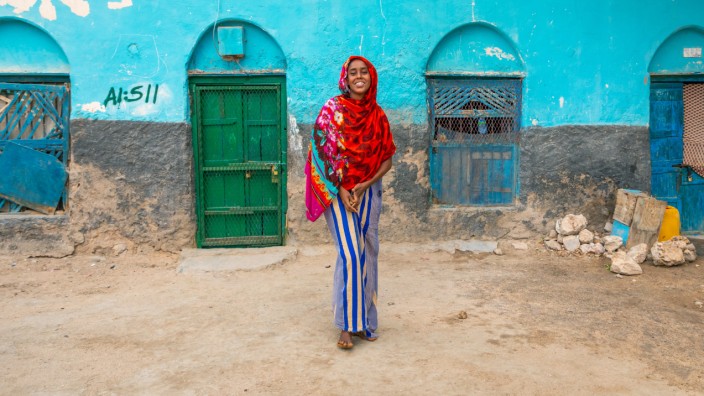 On the wall of Edna Adan’s small office, dozens of photos show her alongside heads of state and personalities from around the world, such as Bill Clinton or Kofi Annan. She is one of the first midwives to graduate from the Horn of Africa, who in turn trained other midwives, and served as regional director of the World Health Organization (WHO). Her husband was the President of Somaliland, she herself was later Minister of Foreign Affairs. In a small country like this, there are many things you can do when you want to.

Most of the personalities that can be seen in the photos of Edna Adan’s office have never set foot in Somaliland. “The world has decided to ignore us , ” sighs the latter. Most people around the world have probably never heard of Somaliland. Or think we are talking about Somalia, three times the size. But wouldn’t this just be one of the reasons for Somaliland’s success? Which seems all the greater when we compare the political situations of the two countries.

In Somaliland, we vote in May [legislative elections are scheduled for May 31], preparations are proceeding normally, calmly. In Somalia, the president has just had his mandate extended by two years, arbitrarily. Hargeisa, with around 1 million inhabitants, is one of the safest capitals on the continent. On the other side, in Mogadishu, the Islamists are terrorizing the population. Islam in Somaliland is relatively tolerant. “We have nothing to do with them anymore,” Somalilanders say when they compare themselves to their neighbors.

On May 18, Somaliland will celebrate its 30th anniversary of independence from Somalia. The opportunity to tell the world, for once, an African-style success story (they are rare enough to be talked about).

The story of a country which is still among the poorest in Africa, it is true, but which has become one of the safest and most peaceful on the continent. It is not just a young country, it is also a one of a kind experience. Because, unlike many others in Africa, the country has been ignored, obscured. Not only by heads of state, but also by development aid. Is the country doing so well, despite the lack of help? Or is it precisely because of the lack of help? Is this state only one?

For the world, in fact, the Republic does not exist, although it has its own borders and its own currency, the Somaliland shilling. Only Taiwan and Coca-Cola are exceptions: Taiwan [a territory itself isolated on the international scene] has a representation in Hargeisa, and Coca-Cola has a bottling plant on site. Somaliland can import whatever products it wants, as long as it pays. To export, on the other hand, is a different story, because it must respect the rules that have been negotiated for Somalia. Fish, for example, cannot be exported under the “Somaliland Origin” stamp , but only under the denomination of origin of the unloved neighbor.

There are half a dozen “non-states” around the world that consider themselves independent states but which, to the rest of the world, are an integral part of another state. They do not issue valid passports and cannot join any trade treaty.

They cannot enter the United Nations or participate in the Olympic Games under their own colors. Somaliland may have beautiful beaches and rock paintings, but tourists do not come, the British and American governments having ranked it, along with Somalia, among the countries to which it is strongly advised not to visit. Somaliland’s destiny is therefore to be able to count only on itself, but without ever being independent.

“As a woman, I can move around in complete safety, drive, sleep with the door open, speak in public and attend conferences. I have a university of 1,500 students, 70% of whom are women. ” What Edna Adan wants to tell us is that Somaliland fulfills all the conditions that the European Union and the United Nations demand of. Source link