A Case for Statehood

For 30 years, Somaliland has called for its independence as a sovereign nation. Now, as Somalia is gripped by its latest democratic crisis and Somaliland unveiled a new strategically-located container port in Berbera last month, the semi-autonomous region hopes the international community will view its own election and economic potential as a sign it should be allowed to break away.

Local election. On May 31, Somaliland held parliamentary elections, with more than a million people voting. The results were celebrated as a win for democracy when an alliance of two opposition parties gained the majority, giving them the power to run councils and select mayors. The Justice and Welfare Party added its 21 seats to the 31 seats secured by the Somaliland National Party, known locally as Waddani, to oust the ruling Peace, Unity, and Development Party, known as Kulmiye.

Still, none of the 13 women who ran for office were elected, and the election was marred by reports that five opposition candidates were arrested ahead of the vote—not to mention the harassment of journalists. The election itself was also more than a decade late, delayed by a lack of funding and a dispute over the electoral commission’s composition.

“We’re not saying we’re perfect; we’re saying we’re on the right path,” Bashir Goth, head of the Somaliland mission to the United States, told Foreign Policy. “Election is one factor, but there are areas we are doing well—security and other areas—and we hope with international recognition, we will be able to be a very good member of the international community and we will do even better.”

International recognition. A former British colony, Somaliland gained its first taste of independence in 1960, but just months later, the new parliament decided to join the former Italian colony Somalia, in what they hoped would eventually become a federation of Somali states in the Horn of Africa. In a 1961 national referendum, a majority of northern voters in what is today Somaliland rejected unification (and many boycotted the vote), but a majority in the south voted in favor.

Army officers led a rebellion to ensure Somaliland’s independence, but it was ultimately quelled—although tension has remained between the north and south of the Somali Republic. As Somalia devolved into a Marxist dictatorship, Hargeisa, the capital of Somaliland, wanted out. In 1991, Somaliland’s leaders decided to break away, forming a polity with all the trappings of statehood: a currency, a passport, and a president of its own. It also has a national day, each year celebrating its decision to break away with parades, with this year’s 30-year milestone attracting additional fanfare on May 18.

What it never received, however, was recognition as a state. The United States and other Western powers have deferred to the African Union (AU), and the continental body has in turn avoided making a decision. Instead, it has continued to support efforts to stabilize Somalia as a country that includes Somaliland and other provinces attempting to break away: Puntland and Jubaland.

Despite a 2005 fact-finding mission that found Somaliland’s situation to be “unique and self-justified in African political history,” the AU may also be deterred by the history of Eritrea and South Sudan, two countries that became mired in conflict soon after they gained independence. It’s a comparison Goth and others have heard before.

“It’s a valid question, but it’s the wrong analogy. It’s like saying if one African country is not doing good, all African countries are bad,” Goth said. “All the 30 years we have been out of Somalia, we were building our peace, building our institutions, building our democracy. We have all the requirements of a state.”

Building infrastructure. Perhaps most significantly, Somaliland has also built the Berbera Port, opening a new terminal on June 24 . Operated by Dubai Ports World, the new terminal increases the Berbera Port’s annual capacity from 150,000 containers to 500,000 containers along a key global trade route for crude oil. It also broadens a trade corridor between Somaliland and landlocked Ethiopia, which also has a large Somali community, and sent a high-level delegation to the opening.

The Berbera project has strengthened ties between Gulf countries and the breakaway state, explains independent journalist Ismail Einashe. Along with Emirati investment, Turkey and Taiwan have also looked to invest in Somaliland. Kenya has considered opening a consulate in Somaliland while Kenya Airways planned to launch a route between Hargeisa and Nairobi, announcing a delay over operation requirements.

“What is shifting is the engagement of regional and international players into the Somaliland situation,” Einashe said. “Somaliland is cementing its reputation as being a haven for democracy in the region, but it’s also increasingly getting the interest, in terms of business and other kind of investments, from countries that feel they no longer have to pay lip service to the Somali government, that are increasingly going out on their own and engaging directly with the government of [Somaliland] President Muse Bihi Abdi and Hargeisa directly.”

Threats from within. For a state with no real recognition in a volatile region, Somaliland’s achievements are commendable. Yet, the very elections Somaliland touts as a sign of sovereignty could also be a threat to its stability, Einashe warned. Although the political elite remain singularly focused on gaining recognition, Somalilanders younger than age 30 have known nothing but this anguished political purgatory.

“When you keep a place like Somaliland in a limbo state for so long, then perhaps there’s a kind of weariness around this democratization process because if it doesn’t deliver independence, why would people continue on that road? There’s always that danger,” Einashe said.

A revolution in Eswatini? For over a week, bloody protests have gripped Eswatini (formerly known as Swaziland), Africa’s last absolute monarchy. Protests in the small country encircled by South Africa and Mozambique started after the prime minister banned citizens from delivering petitions to government offices. For months, citizens had been marching to their local constituency offices demanding multiparty democracy, job creation, and police reform.

Protesters responded by burning and looting businesses owned by King Mswati III. The king has ruled Eswatini since 1986 and lives a lavish lifestyle that is increasingly resented by the two-thirds of the population who live below the poverty line and the high number of unemployed youth. The state ordered an internet blackout and instated a strict curfew under the guise of COVID-19 regulations. The police and army have waged a crackdown on protesters, with the the estimated death toll rising as high as 70. 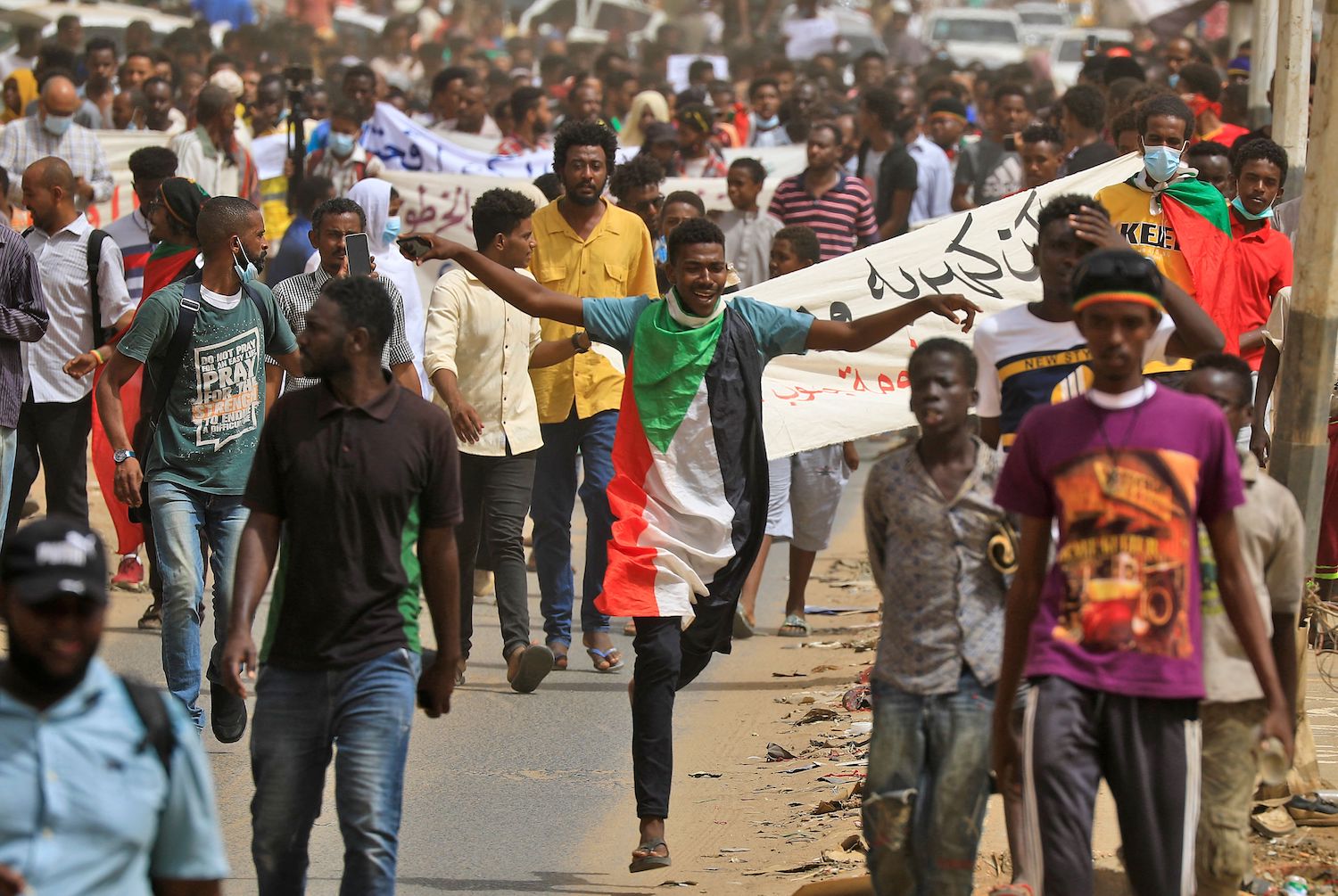 Sudanese protesters participate in a march urging the government to step down over delayed justice and recent economic reforms in Khartoum, Sudan, on June 30.ASHRAF SHAZLY/AFP VIA GETTY IMAGES

Protests erupt in Sudan, again. Fresh protests erupted in Sudan last week, as thousands of people gathered on the streets of Khartoum, demanding the resignation of the transitional government. Protesters were angry over economic reforms backed by the International Monetary Fund that would see fuel subsidies cut. On the same day, police detained about 200 members of the National Congress Party (NCP), the former ruling party.

Members of the joint military and civilian transitional government have accused NCP members of trying to undermine the new regime as it tries to enact reforms in an economy battered by years of corruption and stagnation under authoritarian Sudanese leader Omar al-Bashir.

Zuma tries to avoid jail. Former South African President Jacob Zuma launched a last-ditch attempt to stay out of jail after South Africa’s Constitutional Court found him guilty of contempt of court last week and sentenced him to 15 months behind bars after he refused to appear before a commission of inquiry into corruption. Zuma, who previously proclaimed he was unafraid of prison as a former anti-apartheid activist, approached a lower court to suspend the warrant for his arrest while appealing to the highest court to hear his reasons for challenging a judgement that was ruled unappealable.

Defying COVID-19 lockdown regulations as he addressed dozens of supporters on July 4, who gathered outside his homestead in the KwaZulu-Natal province, Zuma compared his conviction to the apartheid regime’s tactic of detention without trial, equating his imprisonment during the pandemic to a death sentence. The constitutional court agreed to hear Zuma’s appeal next week.

The reshuffle was not enough to dissuade protesters from taking to the streets on July 3, demanding more action against jihadist groups destabilizing the country. Last month, the country suffered its single worst attack yet, with more than 130 people killed by insurgents in a town bordering Niger in the troubled northeast, bringing the death toll since January to more than 500.

Chart of the Week

Cost of an internet shutdown. Nigerians still cannot access Twitter after the government banned the social media app on June 4. Although a few have been able to tweet via a VPN, the ban has cut millions of people off who use Twitter for business, particularly young people. Global internet monitor NetBlocks has calculated the ban on Twitter has cost the country more than $6 million per day.

This Week in Culture

Mali’s disappearing cultural heritage. Ongoing instability in Mali is threatening some of Africa’s richest archeological sites. An estimated 90 percent of sites in Djenné, Mopti, and elsewhere in central Mali have been looted. Groups of illegal excavators continue to raid the sites, stealing bronze jewelry, statues, manuscripts, and other artifacts of untold value.

There is evidence of growing collaboration among crime networks and insurgent groups in Mali, using one another to raise funds and move valuable goods. Part of the problem is Mali’s siloed approach to security—counterterrorism, organized crime, and international crime units fail to cooperate effectively, and the country’s laws have not evolved to address these interconnected problems.

Long recognized for its archeological riches, Mali is already a signatory to international conventions on illicit trafficking and has relationships with the World Customs Organization and UNESCO, but the country struggles to enforce its own laws. It is the site of an insurgency that has destabilized large parts of the country while successive coups in the capital, Bamako, have undermined Mali’s ability to address its fundamental security challenges.

The Human Rights Centre Calls for an investigation of the repression...