Somalilandsun:Somalia had accused Somaliland of undermining its sovereignty after a delegation led by President Muse Bihi was hosted by President Uhuru Kenyatta at Nairobi’s Statehouse.

But Somaliland through its Foreign Affairs responded by saying such an irrelevant statement Somalia shows nothing but only failure and irresponsibility.

Somalia and Somaliland on Monday engaged in a war of words on Twitter following the latter’s delegation visit to Nairobi.

Somalia had accused Somaliland of undermining its sovereignty after a delegation led by President Muse Bihi was hosted by President Uhuru Kenyatta at Nairobi’s Statehouse.

Through its Foreign Affairs, Somalia said Bihi’s visit must be treated with all contempt it deserved

“Somaliland is the federal Member State of Somalia. It, therefore, has no legitimacy to directly deal with Kenya especially now that we have severed our diplomatic ties,” part of the tweet read. 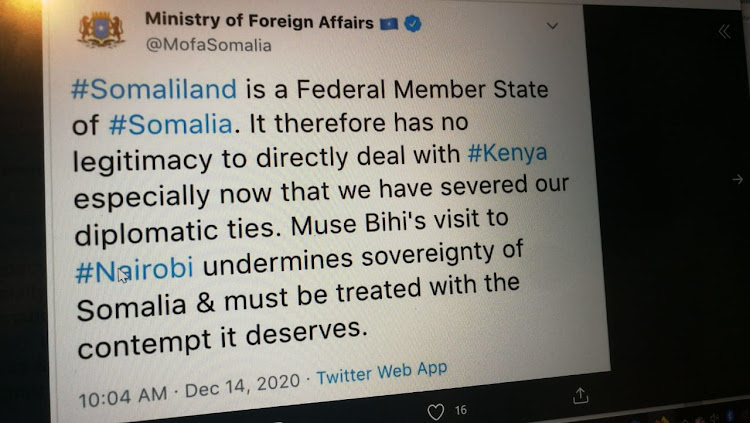 It also read, “Muse Bihi’s visit to Nairobi undermines the sovereignty of Somalia and must be treated with the contempt it deserves”.

But Somaliland through its Foreign Affairs responded by saying such an irrelevant statement Somalia shows nothing but only failure and irresponsibility.

“The irrelevant statement from the failed administration of Somalia shows nothing but only failure and irresponsibility. The Republic of Somaliland and The Republic of Kenya are two independent countries which has (sic) the rightful decision to strengthen their mutual relationship, ” the tweet read.

President Abdi arrived in the country on Sunday for a three-day official visit.

During the meeting, the two leaders initiated discussions on a number of subjects of mutual interest between Kenya and Somaliland.

The two delegations are set to meet again on Tuesday to finalise the talks.

Kenya has no diplomatic presence in Somaliland but takes cognizance of the political and economic stability of the region.

The country is keen to enhance and broaden trade in goods and services, as well as an investment as the cornerstone for long-term development cooperation with the region.

There has been a looming diplomatic spat between Nairobi and Mogadishu after Farmnajo expelled Kenya’s ambassador to Mogadishu Ambassador Lucas Tumbo.

Mogadishu cited what it termed as the Kenyan government’s interference in its internal and political affairs.

“The federal government f Somalia expresses it regret in the government of Kenya’s overt and blatant interferences in the internal and political affairs of Somalia which has the potential to be a hindrance to stability,” a statement from Somalia’s foreign ministry said.

But Kenya in its response dismissed the claims terming them unsubstantiated allegations.

Nairobi said it had not received any Note Verbale or any other official communication from Mogadishu requesting Kenya’s ambassador to leave for Nairobi for consultations.

“This action is reportedly based on unsubstantiated allegations, namely, “continued interference in the internal affairs of Somalia”. The Government of Kenya respects and upholds the cardinal international principles of self-determination, sovereignty, political independence, and territorial integrity of all countries, and in particular those in Africa,” Nairobi said.

Saudi Woman Discovers she is Male 20 years After Birth-Video

China Sternly Warns US Over Taiwan, as Somaliland Stays Aloof

Somaliland: US Military may Get Access to Strategic Berbera Port and...

Cardiff Somali Community Rallies after Catastrophes in Somaliland and Somalia